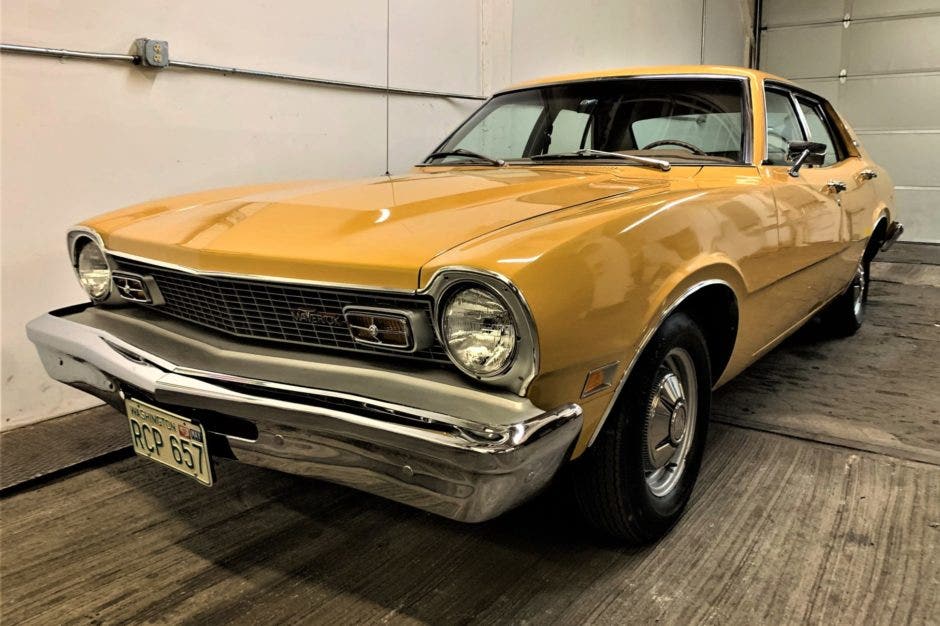 Bid for the chance to own a 66-Mile 1974 Ford Maverick at auction with Bring a Trailer, the home of the best vintage and classic cars online. Lot #26,436.

bringatrailer.com
► Show Full Signature
(Tim) FEBRUARY IS YOU IN YOUR SIGNATURE MONTH!

Catmonkey said:
I'm sure you couldn't find a finer example, but what a turd! A two-door, earlier model would have probably sold for a whole lot more money.
Click to expand...

Turd...LOL! That car checked all the blocks for UNdesirability. A malaise-era car with 4 doors, 6-cylinder engine, ugly color and that cringe-worthy interior. Plus the simple fact it's a Maverick.

Keeno said:
Turd...LOL! That car checked all the blocks for UNdesirability. A malaise-era car with 4 doors, 6-cylinder engine, ugly color and that cringe-worthy interior. Plus the simple fact it's a Maverick.

I totally agree, but all of these “undesirable options” makes it the only car in existence like it with so few miles, which is kinda cool.
► Show Full Signature
(Tim) FEBRUARY IS YOU IN YOUR SIGNATURE MONTH!

Joined Jul 26, 2010
·
6,551 Posts
There's a bizarre-o dynamic with old survivors like this that actually have their own unique levels of appeal in the collector car community.

Part of the dynamic is obvious... It's a car that should have never survived.. It's a car where most have been thrown-away in junkyards. So now, today, with 2020 coming tomorrow, it's an absolute window back in time, a humorous and tongue-in-cheek time warp right back to 1974, styling, colors, and all...

You're not supposed to look at it like a friggin' dream car. It ain't no Mustang. But it's killer kitsch, to the nth degree, and FUN to see that "at least one" dodged the crusher so we could all see what kind of goofy cars were on the road back then.

Back in 2002, my dad won a brand new Chevy S-10 pickup in a Rotary Club raffle. He paid the taxes, and as he's always tended to do, he kept it... He's never driven it (although I start/run it occasionally), so it's basically sitting there with roughly 100 miles on the clock. Why? Why not?? LOL!! There was a day when those trucks were UBIQUITOUS on the road, and part of the subculture of work trucks and cheap transportation. And because "they're not worth saving", there will likely be a time when 99.99% of them are GONE, extinct, wiped from the face of the earth... Except for my dad's dark blue little gem. I'm looking forward to one day, 15-20 years from now, pulling that little sucker into a Cars & Coffee, and watching it get more laughs, more grins, more attention and more "when's the last time you saw one of those?", than any other exotic or muscle car on the lot.

Sometimes the ugly ducklings, when they get tossed into a time capsule for decades, have their own quirky appeal. Because, by all other rules of society, they should have been put out of their misery decades prior. But... ONE... survived.. And now draws plenty of attention and laughs and curiosity at automotive events..
► Show Full Signature
2011 GT500 SVTPP Silver, stripe-delete, glass roof, accessory side scoops and techno-geek package